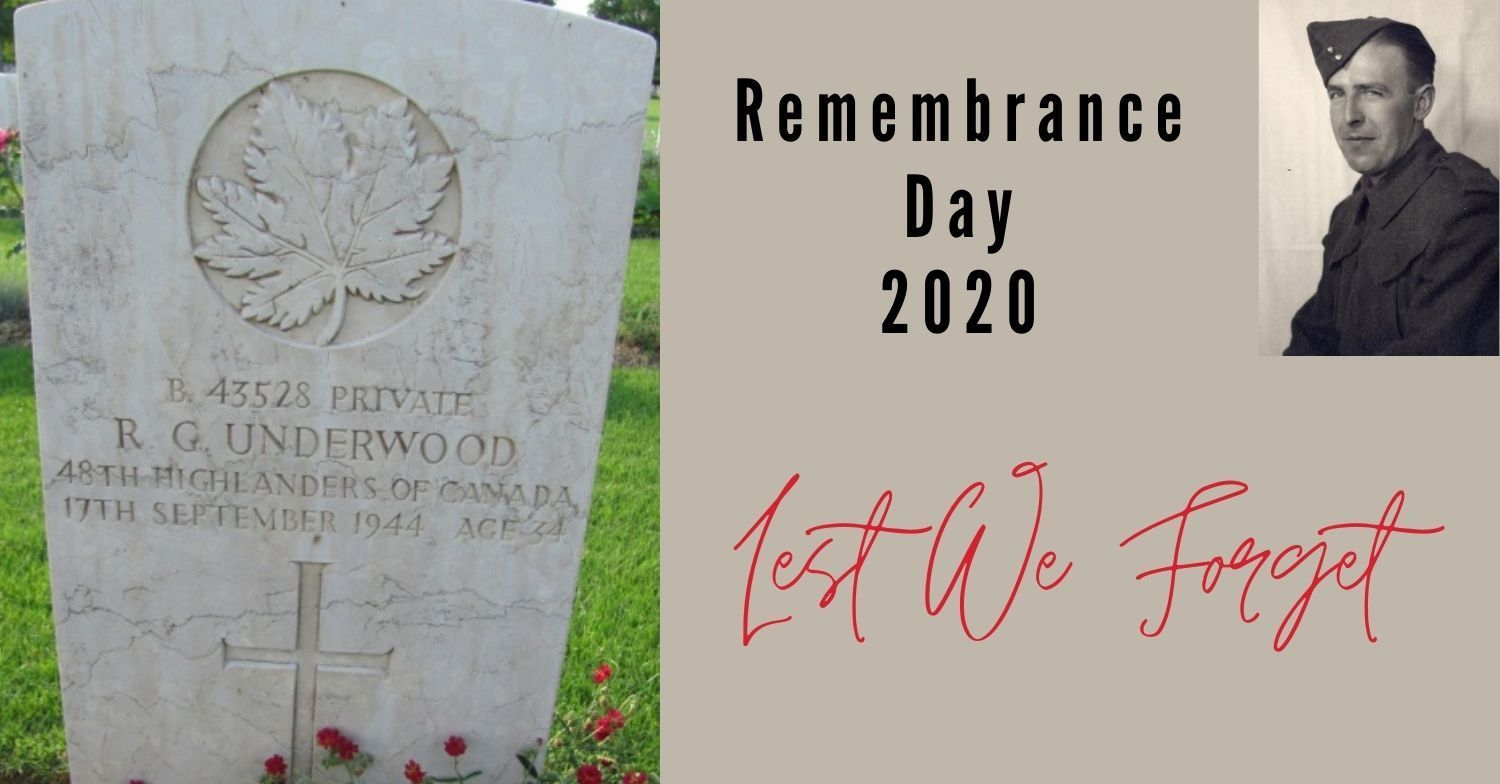 Covenant Christian Community Church is a church rooted in the peace teachings of Jesus. We are also a church made up primarily of Canadian men and women who are grateful for the freedoms we have and are very aware of the sacrifices made by many that afford us those freedoms. Personally, it sometimes feels like a tightrope walk to know how to properly honour those who have sacrificed so much for our freedoms while also remaining faithful to how I believe we should align ourselves against violence in our world. One step I can take in practice honouring men and women of our Canadian Armed Forces while working for peace is to listen to others. Today, on Remembrance Day 2020, I invite you to read and consider something written by Glenn Robitaille for the Waypoint community. In it, he shares both his voice and the voice of some others who have helped to shape his response on this day. Thank you for sharing, Glenn.

P.S. The images in the graphic heading include Ralph G. Underwood in his 48th Highlanders uniform and his headstone at the Coriano Ridge War Cemetary near Riccione, Italy. It was near here where he was killed in action. Ralph was a great uncle I never had the opportunity to meet because of his sacrifice.

“In the beginning of a change, the patriot is a scarce man, and brave, and hated and scorned. When his cause succeeds, the timid join him, for then it costs nothing to be a patriot."

In the early eighties, I represented local clergy at a Remembrance Day event for students at Corpus Christi Elementary School, presently known as James Keating in Penetanguishene. I will get back to that story shortly; but first, a little bit of history.

I am a proud Canadian and the son of a retired Major in the Ohio National Guard. I have wonderful memories of my handsome father, standing tall in his officer’s uniform with his brush cut hair and spit shined shoes looking every bit the hero that I imagined him to be. I also remember the anxiety I felt as I registered for the draft during the waning months of the Viet Nam War, and my reluctance to support a cause that I did not fully understand. Viet Nam ended just before my involvement was necessary but larger moral questions sparked in me: What do I really think about the use of violence to solve political problems and could I actually kill if called upon? I settled my questions in conversation with Ernest (E.J.) Swalm, a framer of the Peace Position in Canada, at his home in Duntroon, Ontario. He spoke of his time in Kingston Penitentiary as a conscientious objector during the First World War and how he was regularly forced to play Russian roulette as punishment (although the gun was never in his own hand). Being non-resistant back then was viewed as cowardly and nearly as hazardous to one’s life as participating in war. I adopted the motto To Remember is to Work for Peace, as an adjunct to the poppy as popularized by Mennonite Central Committee in the 1980’s.

Working for peace is the perspective I brought to a gymnasium of young students, among whom were my own children and a handful of classmates who likely work at Waypoint today. I remember seeing the disappointment on the faces of the veterans who also spoke and the cold reception I received from them afterwards. “Working for peace is certainly important,” one gentleman told me, “but it isn’t what I am remembering today.”

Lest we forget is the motto that inspires us as Canadians on this day. We remember how narcissistic demagogues were able to foist fear and hatred on the masses and rally ordinary people to support horrific causes. We remember how tyrants committed cultural genocide by twisting the truth and creating imaginary threats against vulnerable people. We remember how our grandparents, parents, uncles and aunts fought to stem the tide of these forces, many of them never coming home again. We want peace, but we need to remember what compromised it. What we do not explicitly name and recall we are doomed to repeat—that is the lesson of history. In more recent times, Rwanda, the former Yugoslavia, Iran, Iraq (among others) have all engaged in cultural genocide and the attempted eradication of people who look, think or believe differently than they.

We are not above this in North America. Human fear is easily exploited and no shortage of “killers” are ready to sculpt an imaginary enemy out of silly putty.

On November 11th at 1100 hours we will pause to remember—two minutes of silent reflection to attune our minds and hearts—a necessary revisiting of the worst of what humanity can do and the best it can bring out in others. We remember how brave Canadians faced down existential threats and the unchecked evil that required them to do so.

Working for peace is important, but it is not the message of this day. Lest we forget. Lest we forget. Not everyone is a patriot. Not all motivations are equal. Leaders do emerge who care more about ambition than the common good. You will know them by their fruit, or in some cases, by the lack thereof.

To all who have sacrificed, thank you for your service. We will remember. The peace loving people of the world must never forget; and neither should those who plan to threaten it.